In a press-release of 1970, concerning the presentation of the Blackhawk,
James O'Donnell stated that:

"Stutz will offer four other custom-made models later in the year."
"The other cars in the new Stutz line are the Blackhawk convertible,
the Indy, an Indianapolis 500 style racer modified for street use,
a limousine,
and the V.I.P., an automobile designed for parade and ceremonial use."

The Blackhawk convertible was later named Bearcat.
The production started in 1979, but there was an early design, which you can find here.
The limousine, named Ministeriale never was produced,
but an early sedan, named Duplex was produced in 1971.
To learn more about the V.I.P. car, please click here.

But what about the Indy?
Since I have read that press-release, I searched for information, asked a lot of Stutz-enthusiasts,
but nobody had any information on that car.

So, when the plan was made to visit Mr. Exner, in August 2004,
this question was one of the topics on my list...
The question was answered before I was able to ask him about that model.
Just after the welcome in his home,
Mr. Exner showed me his studio, and there the answer hung at the wall: 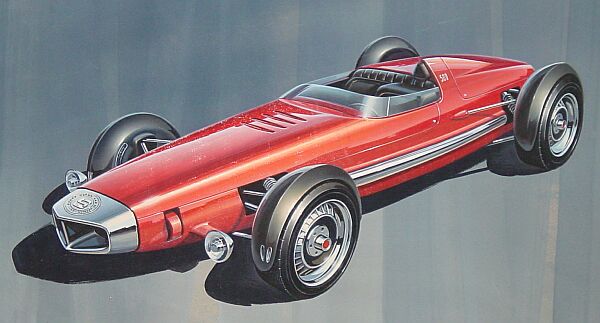 Mr. Exner told me that his father, Virgil M. Exner senior had designed these cars,
in 1972/73. (While Virgil Exner junior worked on a personal race car project in Europe...)
Exner senior liked race cars, and after designing the Revival Cars,
he must have had the idea of creating a Stutz Indy racer.
(Stutz was the best American car that ended "24hours of LeMans",
before Ford won that race with a GT40)
But he designed more than the Stutz Indy 500 car, he also designed two competitors for it...

Here you can see a race-car with an "M" on the radiator-grille.
We don't know if he thought of Maserati, or Mercer.
I think it is a Mercer, as he did a Revival Car of a Mercer, too.
Have a look at the little flap between the radiator and the wheel,
this is a hidden headlight, like it was also used on the Mercer Cobra.

The second competitor to the Stutz Indy project-car was this one.
There is no name on it, but the radiator-logo reminds of the Duesenberg-logo,
like it was used on the 1966 Duesenberg prototype. 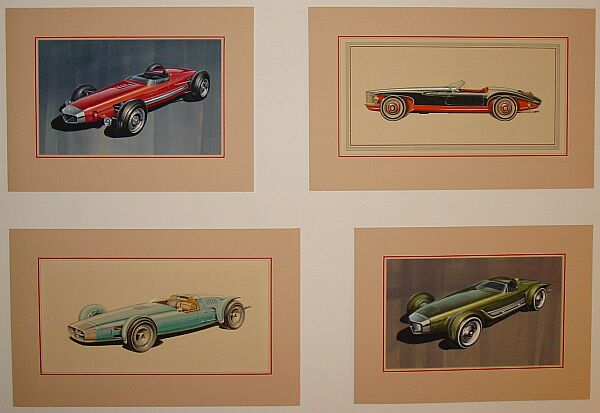 Here is a shot of all three Indinapolis race-cars with the additional (early) Bearcat design.

I think these pictures never were published before,
so the mystery about the Stutz Indy, as it was mentioned in the press-release of 1970 is solved,
more than 30 years after the above statement was made.

These photos are not showing the brilliance of the real artwork of the drawings,
created by Virgil M. Exner.
I'd like to send a big thank you to Mr. Exner
for letting me see these designs, and to bring them online!

Please note:
All these pictures are copyrighted by Mr. Exner. All rights reserved!